Posted on September 1, 2015 by Eddie Playfair

I think it is a reasonable aspiration that 16-18 year olds who haven’t achieved a threshold standard in English and Maths should continue to study both subjects in some form as part of their programme of study post-16. If possible, students should aim to achieve a GCSE grade C, or the proposed new grade 5, in both subjects by the time they complete their post-16 education.

I also understand the call for alternative English and Maths qualifications post-16 but would only support these if they have absolute parity with GCSE. There should certainly be better ‘stepping stone’ qualifications for those students who have some way to go before achieving a grade C but this does not mean settling for a second rate, watered-down version of the accepted threshold. The notion of ‘functional skill’ in literacy and numeracy may be a useful baseline concept but I don’t think we should accept this limited aspiration as the sum total of the English and Maths which we expect young citizens to have mastered by 18.

So this leaves us with a system which requires that large numbers of sixth formers retake their GCSE English and Maths post-16 and which expects their sixth forms to help turn ‘failure’ at 16 into success at 17 or 18. It’s hardly surprising that we find it difficult to get anything like the pass rates one year on with students who couldn’t achieve a grade C at 16 despite all the targeted support and coaching provided at school.

For those sixth forms with hundreds of ‘D grade’ students, a high proportion of the cohort will inevitably be close to the C/D borderline and small shifts in the C/D grade boundary can make a massive difference to pass rates. These can ‘yo-yo’ between years despite stable and high quality specialist teaching. The sheer size of the cohort affected means that these results weigh heavily when Ofsted make their judgements; as many colleges have already found to their cost.

Needless to say, none of this applies to those selective sixth forms who only enrol students who have already crossed this threshold. They can leave the ‘mop-up’ job to someone else and can therefore evade any of the criticism for low retake pass rates.

This adds up to a major challenge for sixth form providers, particularly the more comprehensive or inclusive ones who find themselves at the sharp end of the problem. If we are to take on the responsibility for helping more students cross the English and Maths threshold we will need the system to help us rather than being stacked against us. This is a national challenge which requires a national strategy as well as local partnership.

So instead of berating us for poor results what more could be done to address this challenge?

An effective strategy could start with a number of elements:

One proposal which won’t take us forward is that recently made by the Policy Exchange think-tank here. They have shone a welcome light on the lack of funding for post-16 programmes, including for GCSE retakes. However, their prescription would put a price on failure in GCSE English and Maths at Year 11, penalise schools and transfer the resource to sixth forms. This has rightly been described by Sarah Jones from BSix Sixth Form College here as ‘robbing Peter to pay Paul’. This is a market solution which seeks to impose financial penalties for failure in the hope of incentivising success. I doubt if there is a single secondary school in the country which is not highly focused on raising GCSE English and Maths pass rates. The threat of financial penalty is unlikely to sharpen that focus. If pass rates are to rise, this will be achieved by pedagogic and educational means – not by impoverishing schools.

Debra Kidd has also written an excellent post on this issue which makes this case and concludes by arguing for less external assessment at GCSE level or even the abolition of GCSE.

The challenge of raising achievement in English and Maths across the full age cohort is one we must all share. It won’t be easy and the debate needs to continue. 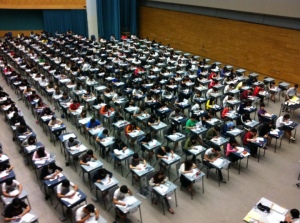 I am a Senior Policy Manager at the Association of Colleges (AoC) having previously been a college principal for 16 years and a teacher before that. I live in East London and I blog in a personal capacity about education and culture. I also tweet at @eddieplayfair
View all posts by Eddie Playfair →
This entry was posted in Education policy and tagged achievement, collaboration, criterion referencing, Education, English, GCSE, marketisation, Maths, partnership, Policy Exchange, Post-16 funding, Sixth form, success. Bookmark the permalink.