In conversation with Eugenia Cheng

We were delighted to welcome Dr Eugenia Cheng, the author of Beyond Infinity and How to bake pi to Newham Sixth Form College (NewVIc) last week to talk about her passion for maths and her mission to rid the world of ‘maths phobia’. As well as having written these two very accessible books about maths, Eugenia is a senior lecturer in pure maths at Sheffield University and has worked at the universities of Cambridge, Chicago and Nice. Her brilliant YouTube lectures and videos have been viewed over a million times and she is also a concert pianist and an accomplished cook.

The idea of infinity is one of those mind-boggling paradoxes which fascinate people of all ages; a concept which seems to be beyond Maths and beyond comprehension. Eugenia spoke about how we can use the idea of infinity, which is by definition unquantifiable, to help us solve more concrete problems and how, for instance, it was useful in the development of calculus.

Eugenia also spoke about why there are still too few women working in Science, Technology, Engineering and Maths (STEM) fields and how the culture of these disciplines needs to change in order to attract a broader range of people.

Could Eugenia’s infectious enthusiasm and promotion of Maths as both a logical and creative activity help us address the national challenge of supporting those many students who haven’t yet achieved a GCSE grade C by the age of 16 and are struggling with their GCSE Maths retake?

Eugenia herself was not convinced that we should put so much store by this rather arbitrary measure and advocated deeper learning rather than rushed test-preparation. Our audience of students, teachers and parents were certainly persuaded by her account of turning around the perceptions of her Arts students, including many who had initially worn their ‘maths phobia’ as a badge of pride. She described how people can learn to approach maths problems in a range of different ways and overcome their fear of being absolutely wrong and that is when the barriers to understanding start to come down.

We asked those who attended to describe ‘what I like most about maths’ and the range of answers reveals many positive reasons for enjoying the subject:

It’s a universal language understood by everyone.

Maths is the language of Science, Music, Computing, Engineering …

I couldn’t be a Physicist without it!

Mechanics is my favourite. What I like about it is that we are able to figure out unknown quantities without explicitly measuring them.

The complexity – where everything has its particular place in a complex whole.

The indisputable objective beauty in its structure – everything is connected.

It opens up a world of the imagination where any problem can be understood and solved.

The fact that there isn’t only one way to solve a problem and there are different methods to suit everyone.

Getting the answer right!

…and finding a way out.

Eugenia’s own description of why she loves maths:

It’s not just about getting to a destination…it’s about the fun, the mental exertion, communing with mathematical nature and seeing the mathematical sights.

This is a long way from the drudgery of being repeatedly asked to solve uninteresting problems, in fact it’s: 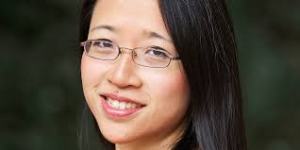 I am a Senior Policy Manager at the Association of Colleges (AoC) having previously been a college principal for 16 years and a teacher before that. I live in East London and I blog in a personal capacity about education and culture. I also tweet at @eddieplayfair
View all posts by Eddie Playfair →
This entry was posted in Education, NewVIc, Science, Students and tagged Beyond Infinity, Education, Eugenia Cheng, GCSE Maths, Infinity, Maths, maths education, Newham Sixth Form College, NewVIc, STEM. Bookmark the permalink.