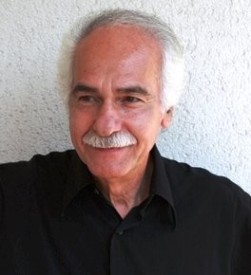 The brilliant Moroccan poet, novelist and playwright Abdellatif Laâbi is the epitome of the engaged writer. Born in Fez in 1942, he studied at the University of Rabat and was one of the founders of the literary magazine Souffles in 1966 which advocated social and political renewal in Morocco as well as cultural commentary and was banned in 1972. His political activity brought him into conflict with the authoritarian regime under King Hassan II in the so-called ‘years of lead’ and from 1972 to 1980 he was imprisoned and subjected to torture for ‘crimes of opinion’.

He has lived in France since 1985 and was awarded the Prix Goncourt de la Poésie in 2009 and the Académie Française’s Grand Prix de la Francophonie in 2011. His work is a lifelong confrontation with the barbarism humans are capable of:

Selections of Laâbi’s poems have been translated into English by André Naffis-Sahely, the latest is Beyond the Barbed Wire, published by Carcanet with support from English PEN.

In his 2013 interview with Christopher Schaefer he offers a critique of the divided Moroccan education system and says:

“School is where we form citizens, where we form democrats, individuals attached to democracy, to human rights, to humanist values that guard them against intolerance and extremism. That’s what I propose. But for me today, the political class as it exists is no longer capable of leading the fight for genuine democracy…We need the youth of today to take on that responsibility…”

In January 2015, in the wake of the terrorist killings in Paris, Abdellatif Laâbi offered the following poem as a “humble prayer that barbarism may not kill even hope”. This reminder of the necessity to draw a clear line between humanity and barbarism was taken up by many in France and across the world as a resource for hope and solidarity (this translation is mine).

I attest there that there is no human being

other than one whose heart trembles with love

for all their fellows in humanity

One who ardently desires

more for others than for themselves

One who considers life

than their beliefs and deities

I attest there is no human being

other than one who struggles unrelentingly

against the hatred within themselves and all around

on opening their eyes in the morning

what will I do today

to not lose my quality and my pride

Democratic emotions in the face of barbarism – Philippe Meirieu (April 2015)

I am a Senior Policy Manager at the Association of Colleges (AoC) having previously been a college principal for 16 years and a teacher before that. I live in East London and I blog in a personal capacity about education and culture. I also tweet at @eddieplayfair
View all posts by Eddie Playfair →
This entry was posted in Culture, Education, Poetry and tagged Abdellatif Laâbi, citizenship education, English PEN, France, hope, I attest, Morocco, Poetry, Solidarity, terrorism. Bookmark the permalink.