In which country has the national audit agency investigated the cost of upper secondary education and found it to be costly and inefficient? The figures have only recently been calculated and it seems that this phase is more expensive than the equivalent in any other European country.

The country in question is France and the phase is the 15-18 age group covered by the country’s lycées or senior high schools.

According to the French Cour des Comptes, equivalent to our National Audit Office, every hour of teacher contact in a lycée costs the French state twice as much on average as the equivalent in the UK: 10,102 Euros compared to 5,017 Euros. To add further to the differential, upper secondary students in France receive an average of 17% more hours of teaching; 1,108 hours per year compared to 950 in the UK.

In fact, the UK figures probably include Year 11 (equivalent to the first year of the lycée) which will distort the average. The reality for English sixth forms is that the state caps our funding at the equivalent of 600 hours per year per student and so there is no funding for any further hours. In effect, sixth formers in England are being taught for around 54% of the hours of an average French sixth former.

Part of the problem in France is the proliferation of specialist pathways. These options are twice as expensive to offer as the core subjects – mainly because they run on relatively small student numbers. This has led to calls to simplify the Baccalaureat school leaving exam.

But the most significant factor is the size of institutions. France has 4,291 lycées and for historical and political reasons, many of them are very small – around half of them have less than 500 students (ie: year groups of less than 170) and over 10% of all lycées have less than 100 students (barely 33 per year group).

The Cour des Comptes is suggesting an optimal size of around 800 students per lycée and the government is also proposing a 6.5% cut in teaching hours. If this could be achieved, it would still leave French teenagers with over 1,000 hours of contact time per year, or more than 30 hours per week. It would also create institutions which would still be smaller than many of their English counterparts.

On the other side of the channel, England’s 92 sixth form colleges have an average size of 1,700 students aged 16-18, more than twice the size suggested for the new ‘big’ French lycées. Also, our funding has been cut to the bone and we can barely afford to provide the 15-17 hours a week tuition which passes for a ‘full time’ programme.

Nevertheless, English schools are still being encouraged to open new sixth forms however small and inefficient they may be. There are around 2,200 school sixth forms with an average size of 208 students each. If England chose to move towards a universal sixth form college model, all these students could be accommodated in just 270 sixth form colleges.

At the other end of the spectrum, England’s 219 General Further Education and Tertiary Colleges have an average of 2,389 16-18 year old students each; hardly small-scale or inefficient. However, the imminent post-16 area reviews seem set to promote the creation of even larger colleges.

In England, post-16 is the lowest funded of the phases of education while in France it is the most costly. Perhaps each country could learn from the other and start to converge towards equitable and sustainable investment in upper secondary education and a sensible and viable scale of institution which allows us to offer the full range of options which young people need. 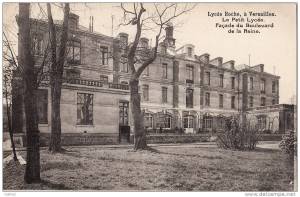 I am a Senior Policy Manager at the Association of Colleges (AoC) having previously been a college principal for 16 years and a teacher before that. I live in East London and I blog in a personal capacity about education and culture. I also tweet at @eddieplayfair
View all posts by Eddie Playfair →
This entry was posted in Education policy and tagged Colleges, Education, efficiency, England, France, lycee, Post-16 funding, Sixth form, Sixth form college. Bookmark the permalink.