Utopia: an imagined society or state of things in which everything is perfect or close to perfect.

Dystopia: an imagined society or state of things in which things are very far from perfect to a frightening extent.

An introduction to the genre of dystopian fiction through reading a classic dystopian novel. 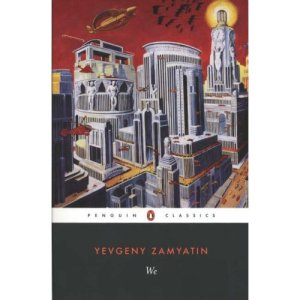 I am merely copying, word for word, what was printed in the State Gazette today:

In 120 days, the construction of the Integral will be complete. The great, historic hour when the first Integral will soar through outer space is nigh. Some thousand years ago, your heroic ancestors subjugated the entire earthly sphere to the power of the One State. Today, you are confronting an even greater conquest: the integration of the infinite equation of the universe with the electrified and fire-breathing Integral. You are confronting unknown creatures on alien planets, who may still be living in the savage state of freedom, and subjugating them to the beneficial yoke of reason…

As I write this, I feel something: my cheeks are burning….I am D-503. I am the builder of the Integral.

We was initially banned in the Soviet Union and first published in English translation in 1924 inspiring the next two dystopian novels in this short list: Brave New World and 1984. In the One State, the inhabitants are known by their numbers, live to a strict routine and have virtually no privacy. D-503’s life is disrupted when he falls in love with the attractive E-330 who is involved in a dissident group. What are they up to and can they take on the One State before it eradicates the human imagination? 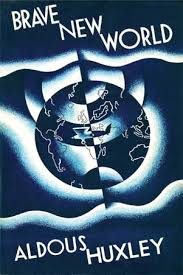 A squat grey building of only thirty-four storeys. Over the main entrance the words, CENTRAL LONDON HATCHERY AND CONDITIONING CENTRE, and, in a shield, the World State’s motto, COMMUNITY, IDENTITY, STABILITY.

Far in the future, the World Controllers have created the ideal society. Through clever use of genetic engineering, genuine ‘test tube babies’,  brainwashing and recreational sex and drugs, all its members seem to be happy consumers. Bernard Marx seems to be alone in his longing to break free. A visit to one of the few remaining Savage Reservations where the old, imperfect life still continues, may be the cure for his distress. This fantasy of the future draws on Huxley’s concerns about where he felt a society of mass consumption and lowest common denominator culture might be going. 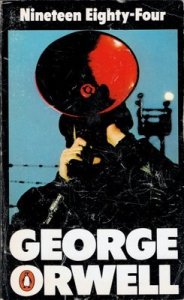 It was a bright cold day in April, and the clocks were striking thirteen. Winston Smith, his chin nuzzled into his breast in an effort to escape the vile wind, slipped quickly through the glass doors of Victory Mansions, though not quickly enough to prevent a swirl of gritty dust from entering along with him.

The hallway smelt of boiled cabbage and old rag mats. At one end of it a coloured poster, too large for indoor display, had been tacked to the wall. It depicted simply an enormous face, more than a metre wide…

1984 is set in a society ruled by a totalitarian Party. Winston Smith works for the Ministry of Truth in London, the main city in Airstrip One. Big Brother stares out from every poster, the Thought Police uncover every act of betrayal. When Winston falls in love with Julia, he discovers that life does not have to be dreary and dull. Winston and Julia begin to question the Party and are drawn towards conspiracy. But Big Brother will not tolerate dissent – even in the mind. This is a terrifying vision of a future in which everything and everyone is enslaved to a tyrannical regime. The book coined many new words and phrases which are in common usage, such as ‘Big Brother’, ‘thoughtcrime’, ‘doublethink’ and ‘Newspeak’. 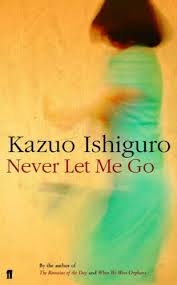 My name is Kathy H. I’m thirty-one years old and I’ve been a carer now for over eleven years. That sounds long enough, I know, but actually they want me to go on for another eight months, until the end of this year. That’ll make it almost exactly twelve years.

A group of friends, Kathy, Tommy and Ruth grow up together in a tranquil but rather strange boarding school. They gradually piece together what is going on in the adult world and what they are being prepared for. A highly atmospheric, psychological novel of growing up, love and loss. The book uses its setting it in a world very similar to ours but with a chilling difference to raise questions about the meaning and the quality of human life.

Choose one of these 4 dystopian novels to read and prepare a brief review to discuss with others.

You might want to use the 20 questions to ask about a book you’ve read to get you started and in addition consider the following 5 questions:

I am a Senior Policy Manager at the Association of Colleges (AoC) having previously been a college principal for 16 years and a teacher before that. I live in East London and I blog in a personal capacity about education and culture. I also tweet at @eddieplayfair
View all posts by Eddie Playfair →
This entry was posted in Culture, Fiction, Learning resources, Reviews, Science in Society and tagged 'We', Aldous Huxley, Brave New World, Critical thinking, culture, dystopia, George Orwell, Kazuo Ishiguro, Never Let Me Go, reading, Science, Science in Society, utopia, Yevgeny Zamyatin. Bookmark the permalink.