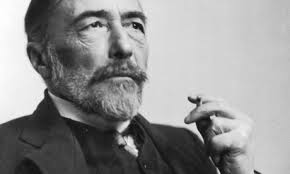 The writer Joseph Conrad visited Corsica with his wife Jessie in February 1921. He was hoping to complete a novel about Napoleon, Suspense, but he was also in search of a connection with his long-dead friend and fellow merchant seaman Dominique Cervoni, who originated from the village of Luri in the Cap Corse.

Joseph and Jessie Conrad stayed in Ajaccio where Conrad visited Napoleon’s house several times. They then travelled via Corte to Bastia where he was able to see the island of Elba from a distance. It seems he was struggling with the Napoleon book and was much preoccupied with the memory of his friend Cervoni.

On their return to Kent, Conrad wrote his final novel The Rover about a sailor in Napoleonic France who is retired from the republican navy but is drawn into a final dangerous and heroic mission away from his quiet life on the Giens peninsula near Toulon. Suspense, however, remained unfinished at Conrad’s death but has been subsequently edited and published. Set in Genoa in 1815 during Napoleon’s first exile and before his escape from Elba, the title refers to this uneasy pause between major historic upheavals in Europe.

In 1874, aged 16 and orphaned, Conrad arrived in Marseille to learn his trade as a merchant sailor. He met the 42 year old Dominique Cervoni two years later when they were both crew members of the barque Saint Antoine travelling to the West Indies. Cervoni was the first mate and became the inspiration for Conrad characters such as Nostromo. They may have later been involved in arms smuggling in Central America, as described in Conrad’s The Arrow of Gold, or his accounts may be second hand and based on Cervoni’s tales. After their return to Marseille they went their separate ways and Conrad joined the British merchant navy and eventually published his first novel in 1895. 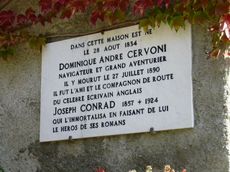 This episode has been written about by the historian and artist Maddalena Rodriguez-Antoniotti in Bleu Conrad, le destin mediterraneen de Joseph Conrad (Albiana 2007) and more recently made into a documentary film by Francois Rossini.

Conrad’s time in Corsica was also the subject of a presentation by the writer and poet Kenneth White in Ajaccio in March 2011. White is the author of Corsica – l’itineraire des rives et des monts (La Marge 1998)

I have drawn on “Bleu Conrad” en avant-premiere a Bastia (March 2014) from the Corse Net Infos website.

I am a Senior Policy Manager at the Association of Colleges (AoC) having previously been a college principal for 16 years and a teacher before that. I live in East London and I blog in a personal capacity about education and culture. I also tweet at @eddieplayfair
View all posts by Eddie Playfair →
This entry was posted in Culture, History and tagged Corsica, Joseph Conrad. Bookmark the permalink.